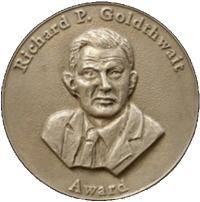 The Goldthwait Polar Medal is given annually, or at the Director’s discretion, to one honoree in recognition for “outstanding contributions to polar research.” It is the highest honor bestowed by the Byrd Polar and Climate Research Center.

Established in 1996, The Goldthwait Polar Medal is named in honor of Dr. Richard Parker Goldthwait, a leading glacial geologist and the founder and first Director (1960-1965) of The Ohio State University’s Institute of Polar Studies, now the Byrd Polar and Climate Research Center.

Richard Goldthwait (1911-1992) was an international figure in polar research and one of the most highly respected glacial and Quaternary geologists of his generation. He conducted field studies around the globe, producing seminal work on the behavior and deposits of contemporary glaciers in comparison with those of the Pleistocene. At the same time, he exemplified commitment to service through his leadership in scientific organizations and mentorship of young scientists, many of whom went on to become leaders themselves.

The Director of the center and an award committee select the medal recipients. The awardee presents the Goldthwait Polar Lecture at a reception in his or her honor.