In the Southern Ocean (SO) there is an excess of macronutrients, yet limited primary production due to iron limitation or co-limitation. Thus the addition of iron (Fe) can greatly affect the cycles of biochemically important elements, increase primary production and affect the structure and composition of phytoplankton communities in the SO. This process is globally significant, as increased Fe fertilization leads to increased carbon sequestration which acts as a negative feedback to increased atmospheric partial pressure of carbon dioxide (pCO2). One source of potentially bioavailable Fe to the coastal regions of the SO is from direct sub-aerial stream discharge in ice-free areas, a source that may become more important in a warming climate. Thus it is imperative to understand the source, nature, potential fate, and flux of Fe to the SO if better predictive models are to be developed. This project investigates in-stream processes controlling dissolved Fe in streams draining into the Ross Sea, including photoreduction, low temperatures and complexation with organic matter. The project follows up on the iron work performed by Sydney Olund (M.S., 2017) as part of her Master’s work. Dr. Gardner, PhD student Melisa Diaz, and MS student Adolfo Calero began this project in the fall of 2019 with field work at New Harbor camp, located along two streams on the coast of Taylor Valley, Antarctica. 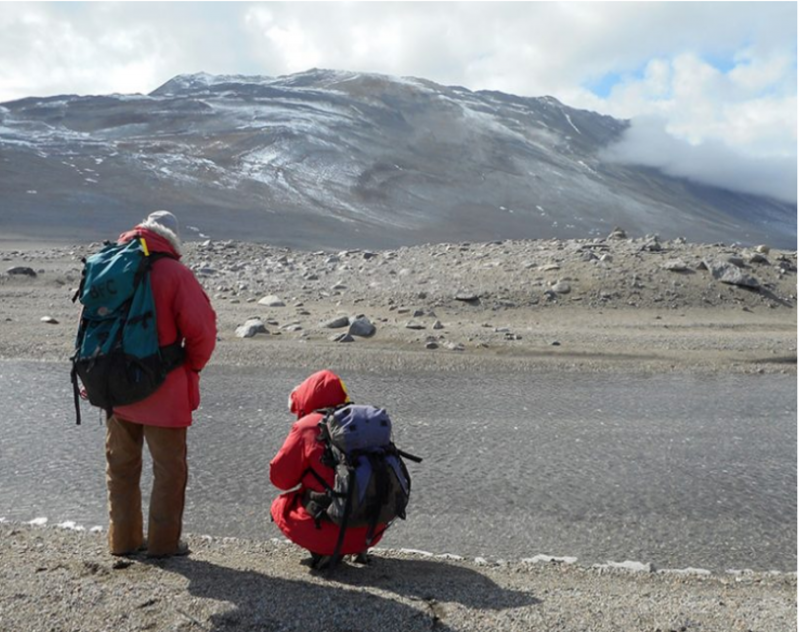 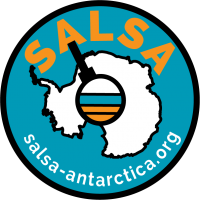 The Antarctic subglacial environment remains one of the least explored regions on Earth. The Subglacial Antarctic Lakes Scientific Access (SALSA) project is an integrative study of subglacial geobiology, water column and sedimentary organic carbon, and geological processes in Mercer Subglacial Lake, a hydrologically active subglacial lake 1.2 km beneath the Whillans and Mercer ice streams in West Antarctica. The project was funded in 2016 by the Antarctic Integrated System Science Program with the National Science Foundation’s Office of Polar Programs. There are eleven principal investigators at eight different US institutions with additional US and international collaborators. Dr. Lyons is a principal investigator on the project, and Dr. Gardner was involved with field work during the 2018-19 Antarctic field season. Our contribution to this collaborative project focusses on subglacial weathering and noble gases along with our colleague Dr. Tom Darrah in the School of Earth Sciences. 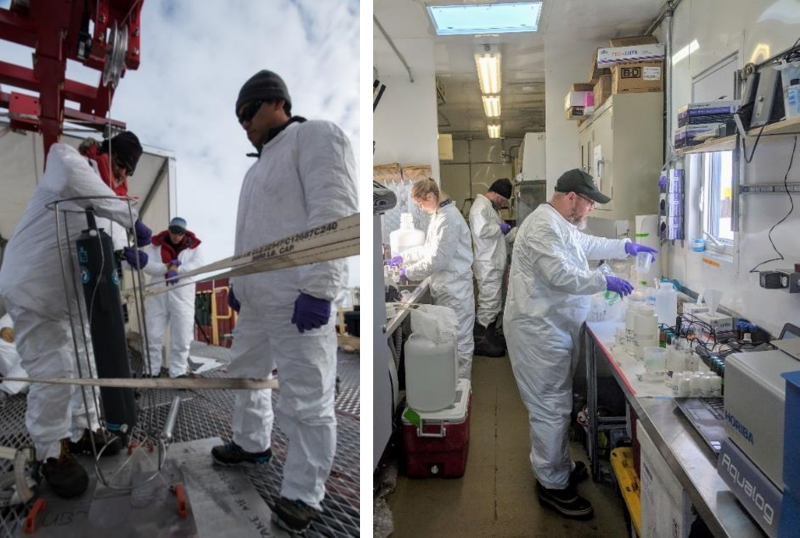 Climate, species interactions, habitat suitability and dispersal drive the origin, maintenance, structure and functioning of ecological communities, but less understood is the relative importance of these drivers in shaping how terrestrial ecosystems respond to climate-driven environmental changes. Ostensibly, the massive environmental changes associated with glacial recession had the greatest influence on the structure and functioning of ecological communities in the Transantarctic Mountain region of Antarctica, yet we currently have few clues as to how biotic communities responded to these changes. The overarching objective of this project is to comprehensively characterize the functional, taxonomic, biotic and abiotic drivers of soil ecosystems in the context of their response to deglaciation since the last glacial maximum in the Shackleton Glacier region. This is a collaborative project with biologist colleagues at Brigham Young University, Colorado State University and the University of Colorado. Our role is to examine the geochemistry of the soils and develop a habitat suitability model to describe the abiotic factors that control species distribution in this region. PhD student Melisa Diaz completed the field season for this project in 2017-18, and this project forms the basis of her dissertation work.

Surface Water Quality in Ohio – the Influence of Agriculture and Urbanization

Our group continues to work in Ohio, investigating the impact of both agriculture and urbanization on the geochemistry of local surface waters. We have worked in the Scioto River system in order to quantify the impact of urban runoff and sewage input on river water quality. We have also attempted to discern between agricultural impact and urban sources on the flux of many elements into the Scioto system, and examined trace metal geochemistry of small urban streams in order to assess how small variations in land type impact water quality. We also finished a large, interdisciplinary plot-scale project to assess how variations in agricultural practices impact chemical weathering and carbon transport. This work mimics the results of the entire Ohio River watershed in regard to the impact of acidification from nitrogen fertilizer on soil weathering. We are continuing this work by “mining” a multi-decade dataset that incorporates climatic, hydrologic, and geochemical data and investigating how the geochemical signature varies with land use and agricultural practices. We have also published work on the uranium concentrations in Ohio surface waters pointing to a possible fertilizer-derived source. Adolfo Calero (M.S. student) is continuing this work by investigating the impact of fertilizer application on uranium concentrations in Ohio soils.

Our research group was been involved for well of two decades in the McMurdo Dry Valleys Long-Term Ecological Research (MCM-LTER) project (https://mcm.lternet.edu/). We have worked with a group of glaciologists, hydrologists, soil scientists and ecologists in order to determine the structure and function of this polar desert ecosystem. This work was diverse and multi-disciplinary. For example, students investigated the atmospheric mercury flux in the Antarctic, the processes responsible for CaCO3 accumulation in polar desert soils, and the geochemistry and quantity of sediment transport from alpine glaciers into the closed-basin lakes of the Dry Valleys, and most recently the flux of Fe into the marine environment. We have also used non-traditional stable isotopes of lithium and boron to better understand solute sources to the aquatic environments. Other students used more traditional stable isotopes such as δD, δ18O, and δ13C to describe in-situ stream processes. Though we are no longer formally associated with the MCM-LTER, we continue to collaborate with investigators in the group on various projects in the Antarctic.