Ice cores are recovered using a spectrum of ice core drills. The most portable and convenient drill is the hand-auger which has a depth range of 30 to 40 meters. For deeper cores, a power source is necessary and the down-hole portion which actually extracts the core from the ice sheet or ice cap may be of several types. The electro-mechanical drill like that shown to the right which was used for the Antarctica - Plateau Remote site is very efficient for retrieving cores to about 200 meters depth on cold glaciers (temperatures well below freezing). Also electro-mechanical drills have been used by various countries (Australia, Denmark, France, Russia and the U.S.) to drill several kilometers through the major ice sheets of Antarctica and Greenland. For extracting cores in 'warmer' ice caps and glaciers (photo below) where temperatures may be only slightly below freezing, the conventional thermal electric drill may be the best tool. 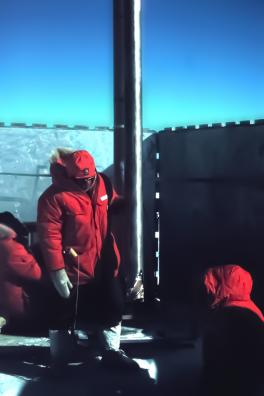 Ice core drills may be powered by various sources, but the two most common are fuel-powered generators and solar panels. Solar panels are a reliable, pollution-free and light-weight source of power. The use of solar powered drills for ice core recovery was pioneered by the Ice Core Paleoclimatology Group at Ohio State and Bruce Koci of the Polar Ice Coring Office in the early 1980s. The superiority of solar power for ice core drilling (where adequate solar insolation is available) was first demonstrated by the recovery of two cores the bedrock on the Quelccaya Ice Capin 1983. The ice cap margin is shown on the left. The solar powered drill system is shown to the right. Since then, several ice cores have been obtained from glaciers at high elevation (>5,000 meters above sea level) using special, portable drills powered with solar panels. The photo to the left done shows the solar powered system used on Huascarán.

A new ethanol thermal electric drilling systemhas been developed for intermediate (1,000 meters) ice coring in cold glaciers. The system is light-weight (about 1,000 kilograms including a six kilowatt diesel generator and a 6.6 meter diameter shelter), environmentally safe and capable of recovering a 100 millimeter diameter ice core at the rate of 400-500 meters per week. The system can be installed easily in 16 hours, and currently is ready for use in the Franz Josef Land area.