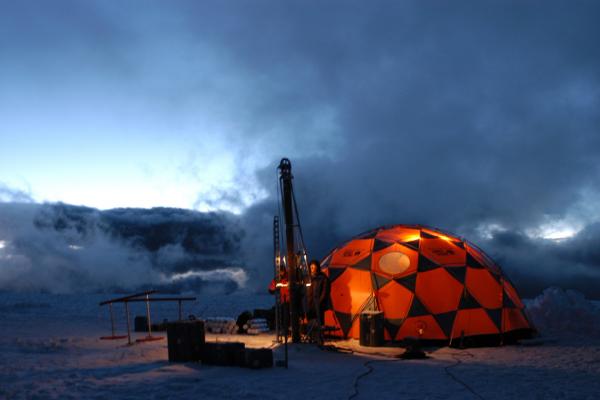 Records of human history, preserved for thousands of years

Originally published in The Conversation.

What can ice cores tell us about historical black swan events?

How do ice cores help in understanding the past?

Ice cores are columns of ice drilled through glaciers that are highly versatile and detailed recorders of Earth’s climate and environment that cover hundreds to many thousands of years.

They store anything that is found in the atmosphere, such as atmospheric gases, pollen, microbes, emissions from volcanic eruptions, dust and salts carried by dust storms from deserts and salt flats, agricultural and grazing lands. They even can record ocean spray along with pollutants from human activities such as lead, mercury and radioactive nuclidesfrom thermonuclear bomb tests.

Ice also preserves records of past temperature in the changing isotopic composition of water, and provides histories of snowfall by the thicknesses of ice that has formed each year.

How can studying ice cores help learn about historical events?

Ice cores provide independent histories of past climate and environmental change that can often be compared to written and archaeological records of human history. This is especially true in the lower latitudes where earlier cultures rose and fell. For example, ice cores from the Quelccaya ice cap in the southern Peruvian Andes provide a nearly 2,000 year-by-year history of tropical climate that has helped anthropologists study how changes in temperature, and annual precipitation and drought patterns tracked the rise and fall of ancient Andean civilizations. For example, a major drought, recorded by precipitation (snowfall) and dust records in the Quelccaya cores, may have played a role in the demise of the Tiwanaku civilization around the year 1000.

Abrupt global events and “black swans,” or rare but impactful events, have been observed using ice core-derived paleoclimate information from high elevation tropical mountains. For example, evidence of the so-called “East India Drought” in the late 18th century was noticed in ice cores from both the Peruvian Andes and the Himalayas. This drought was partially responsible for million of deaths in India. This was a time when several successive El Niños occurred and were linked with the failure of the monsoon rains and decreasing precipitation in parts of tropical South America. Severe droughts were also documented in Egypt, Java, Australia, Mexico and the Caribbean. Great social upheavals, including four civil wars, occurred around the world.

Further back in time, several tropical ice core records contain evidence of a major worldwide drought about 4,200 years ago. This occurred during the rapid decline of the Akkadian Empire in Mesopotamia, the Harappan civilization in the Indus Valley, the so-called Old Kingdom in Egypt and the Longshan Culture in East China.

What kind of evidence would the current pandemic leave in the ice?

Some ice core records show that during the mid-1300s there was less lead in the atmosphere, possibly related to the sharp drop in mining and smelting activities. This coincided with the appearance of the plague known as the “Black Death” in Europe and Asia. This decrease in human industrial activity is analogous to what is happening now during the current COVID-19 pandemic. Throughout the world people are traveling less, resulting in a reduction in emissions of carbon dioxide, nitrogen dioxide and sulfur dioxide into the atmosphere. Future glaciologists will likely see decreases in these gases and their chemical derivatives in ice cores.

As glaciers around the world recede due to climate change, how will it affect our ability to study the past?

Ice cores stored in freezer facilities become extremely important for future research as these unique archives of our past melt away on our warming Earth. The world’s ice is melting at an accelerating rate and this ice melt has already led to the major shrinking or loss of the smaller and very sensitive mountain glaciers in the Tropics such as some glaciers on Kilimanjaro and virtually all glaciers in Papua, Indonesia (New Guinea), where soon all the ice is likely to disappear.

What are the possible impacts of receding glaciers in the areas that you study?

As mountain glaciers disappear and the streams and rivers that arise from them are affected, nearby communities, and to a lesser extent communities further downstream, face the greatest economic and societal consequences, including disruptions to agriculture, hydropower generation, urban water supply and tourism. In many places such as the Andes and Himalayas, glaciers have deep historical, cultural, and even spiritual meaning to the people who live in their shadows.

For example, since our first studies of the Quelccaya ice cap in southern Peru in 1974, we have been interacting with people in the local communities just to the west. Since the mid-1970s, Quelccaya has lost almost 40% of its area. During the dry season, many of the grasslands that feed the herds of alpacas, llamas and sheep of the people in Phinaya, a local semi-nomadic pastoralist community, can be irrigated only with the water that runs off the ice cap and other glaciated peaks that are part of their territorial domain.

The melting of mountain glaciers also presents hazards to local communities. Melting ice forms new lakes along the glacier margins, and the water is held back by natural dams which often fail. For example, we have mapped the retreat of Quelccaya’s Qori Kalis outlet glacier since 1978. A lake started forming in this valley in 1991 and grew to cover 84 acres and to be 200 ft deep. In March 2006, an avalanche from the ice cap fell into the lake, causing the lake to overtop the moraine dam and drown grazing alpaca along the outlet stream.

This article is republished from The Conversation under a Creative Commons license. Read the original article.

Ice Core Paleoclimatology
In the press
Share on Social Media